Gordon Huether’s commemorative structure design for the new Sallisaw Veterans Center honors and respects our veterans, connects with the local community, and acts as a vehicle to educate and inspire.

“I’ve had the honor of creating several commemorative sculptures over the course of my career as an artist and each one is unique. My approach to these art installations consists of telling the story of those individuals most affected by the events that occurred and are often generated from collaborating directly with those individuals. Therefore, the detail of my concept has been left open to discussion, collaboration, and refinement with the veterans of Sallisaw who will interact with the installation most,” states Gordon.

Commissioned by the Oklahoma Arts Council, the form of this art installation is taken from the context of the site and compliments the architecture of the Sallisaw Veterans Center. Gordon took into consideration all environs and aesthetic cues including the shape of the entry plaza, the location of the flagpoles, the tank, the emblem of the five branches, etc. He kept this in my mind while examining the plan view and envisioned two curved forms, which would respond to the shape of the plaza as well as frame the view of the monument sign and the flagpoles. 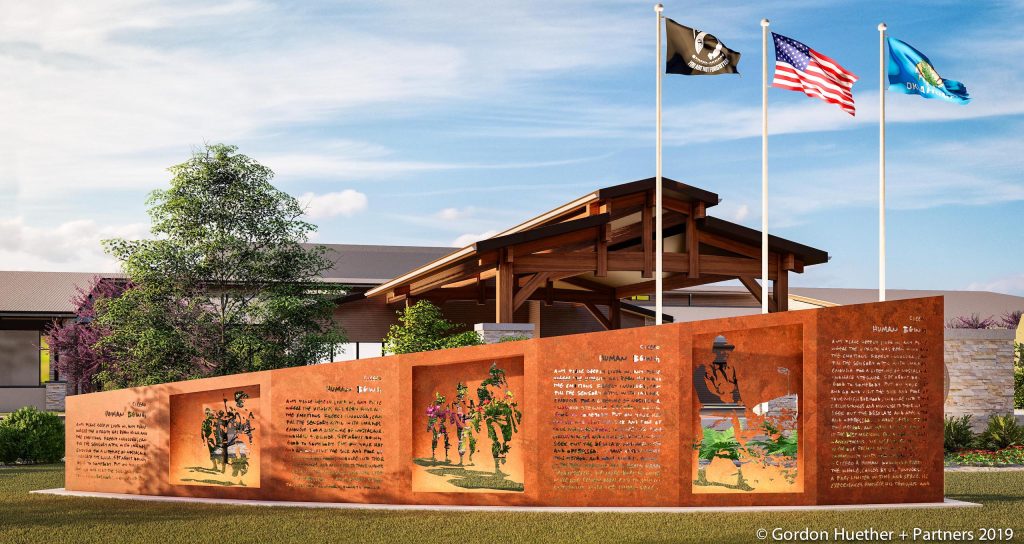 These two curved sculptural forms are roughly thirty feet long each. Both ‘wings’ of the sculpture are made of corten steel and begin at eight feet at the tallest end and are four feet at the shortest end. Each ‘wing’ consists of two layers of seven panels, with every other panel laser-cut to expose the inner side of the opposite layer, thus creating visual depth and dimension as well as beautiful lighting effects and equaling fourteen panels total. Each of the fourteen panels is an opportunity for content, which would be laser-cut and are left open for discussion with the veterans who will use this facility daily. Some suggestions for content include portraits of local heroes: 1st Lt Jack Montgomery and LCdr Ernest Evans, maps of the local area, and words from the veterans and other military content to be determined via collaboration.

This commemorative structure for the Sallisaw Veterans Center is anticipated to be installed in 2022.